Find a Hotel Tonight in
Winnipeg 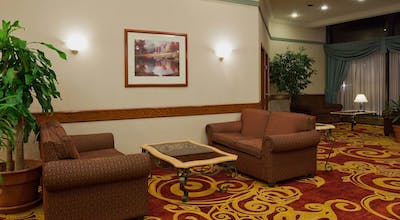 A city where the inspiration for the James Bond character was born and raised must be interesting. Sir William Stephenson is that person, and you'll see remnants of his name in Winnipeg, Manitoba. A city that boasts of the longest natural frozen skating trail in the word that's in operation every winter only adds to the intrigue. What is it about Winnipeg that makes it so intriguing to so many people? I wasn't sure, but I really wanted to see it one day. I thought I'd get that chance when I had work meetings there, but it didn't look like there would be any opportunity for free time and exploring. That all changed on my last full day of work there when I found out I wasn't needed at the meeting for that day. All I had to do to spend 24 hours here was find a Winnipeg hotel room on my own.

Channeling my inner Sir William Stephenson, I grabbed my phone and started sleuthing for Winnipeg hotel rooms. I found an app called HotelTonight and clicked around on it. There were quite a few Winnipeg hotels available, but I was hesitant to jump into the booking process, as that can be quite complicated. With HotelTonight, it was anything but, and within a few minutes I had my Winnipeg hotel room all booked and confirmed. I was thrilled – I grabbed my things and immediately headed over to my new hotel. I had a day of fun ahead of me and I wanted to get right to it.

The downtown of most cities is the best place to get a feel for a community overall. That certainly seemed to be the case with Winnipeg. Downtown was quite a sight, as the architecture was unique. It was a mix of the early stages of the last three centuries, dating back to the early 1800's. It's also very clean, very logical in its setup and incredibly friendly. I couldn't believe how willing people were willing to stop and help me with directions or provide advice on what I should do throughout the day. It was as if I was everyone's personal guest. It gave me a feeling I carried with me throughout the rest of my day.

One of the things that a lot of people from other places do not seem to know is that Winnipeg is an old city with a lot of history. St. Boniface is a neighborhood that serves as an example of that, as it was founded nearly 200 years ago. St. Boniface is known as the French Quarter of Winnipeg, as it's home to a very large French Canadian population. You'll find a lot of shops and boutiques here, and you'll also find cafes, which was great because I was ready for my coffee at that point in the morning. This is a fantastic area to sit and watch people and, as is true throughout Winnipeg, to enjoy the beautiful buildings and skyline.

St. Vital is another historic area that dates back nearly 200 years. When you walk through St. Vital you'll feel as though you're seeing a combination of American suburbia and a European town. The streets are lined with trees and the buildings are decorated with flower boxes. There are also quite a few restaurants here, which was important at the time because it was the middle of the day, and I was famished. I asked some nice people where I should go for lunch, and they told me that there were several choices within a couple of blocks. I chose one that served pub food, and it turned out to be a great decision. I was stuffed but ready to continue with my day.

The Forks is not really a neighborhood, but is a historic site in Winnipeg. It is located at the confluence of the Red River and the Assiniboine River. This specific spot has been used for trading and the like for thousands of years, let alone 200 or more. It's also home to a lot of different shops, and I took advantage of that opportunity to purchase some gifts for the important people in my life. Having taken care of that, I walked around The Forks for a bit longer, appreciating why it is such a natural meeting place for locals and visitors alike.

A lot of folks are not aware that there is a Chinatown in Winnipeg. This neighborhood is more than 100 years old as well, so there is a lot of history here and some unique traditions. To be honest, what I really wanted to do here was eat after all of the walking I did at The Forks. As you can imagine, there were quite a few options available to me, but I had a hankering for dim sum. I heard of a place that specialized in it, stopped in and got even more than I had hoped for. It was fantastic.

As I made my way back to my hotel, I thought back on all that I had discovered that day. Winnipeg is one of those cities that may not be a worldwide tourist destination, but it is a beautiful city that has a lot to offer both visitors and residents. I also thought of how HotelTonight had helped me find a Winnipeg hotel room in minutes, and how I'd make sure to use this app when I traveled in the future. It had been a good day, and I was ready for a restful night.

How many hotels are in Winnipeg?

There are 6 hotels in Winnipeg available from Hotel Tonight.

What are most popular hotels in Winnipeg?

What are the best hotels in Winnipeg?

How much is a hotel room in Winnipeg?

In the last 30 days, HotelTonight prices in Winnipeg have been as low as $59.03, though the average room costs closer to $74.32 per night.

What is the cheapest time to go to Winnipeg?

Our hotels prices have varied throughout the year from $55.58 to $100.26 On average, we've seen the cheapest room prices in April

Which hotels in Winnipeg have a pool?

There are 3 hotels with pools in Winnipeg. Some of them are:
Holiday Inn Winnipeg South
Best Western Plus Winnipeg West
Fort Garry Hotel